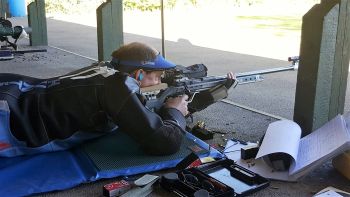 Prone Rifle is one of the most active disciplines shot within the Gloucestershire County, with 9 of the clubs in the county taking part. Shooters from Gloucestershire have represented GB at various levels, and there are 3 county shooters who are in X Class. In the past 12 months prone shooters from Gloucestershire have enjoyed podium finishes at several national competitions such as the Torfaen Open shot at Long Ashton, the British Free Rifle Club shot at the Lord Roberts Centre at Bisley, and the Welsh Smallbore Rifle Association Open in Tondu.

The County Range at Sneedhams Green is very well set up for Prone Rifle, with wind flags and target frames for 50M outdoor shooting. The covered firing point is much appreciated when the weather turns!

The Gloucestershire County team welcomes applicants of all abilities to make up county teams for the NSRA Inter County Association League (NSRA Competition 610), shot indoors over 10 rounds on 10-bull targets. This runs from October/November through to March/April each year. Results are published below. For the 2017/18 year, the County Team finished 2nd behind Worcestershire in division 6.

There is also the Gloucestershire Prone Leagues, for teams of 3. This runs throughout the winter and summer, and is shot indoors on 10-bull targets.

For shooters wishing to develop their skill further coaching is available, with several qualified coaches both within clubs and county coaches available.
Gloucestershire Association also enjoys close ties with the Upper South West Regional Rifle Squad, managed by Keith Simmons, with Karen Butler as head coach. Enquiries should be directed via the Contact Us page.